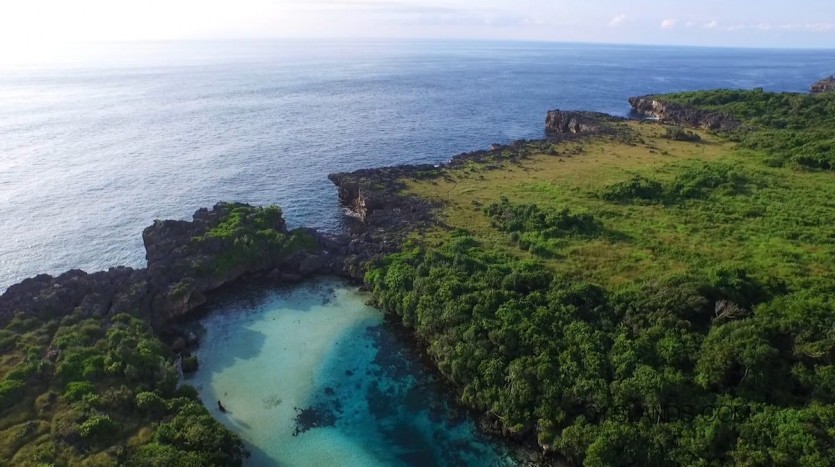 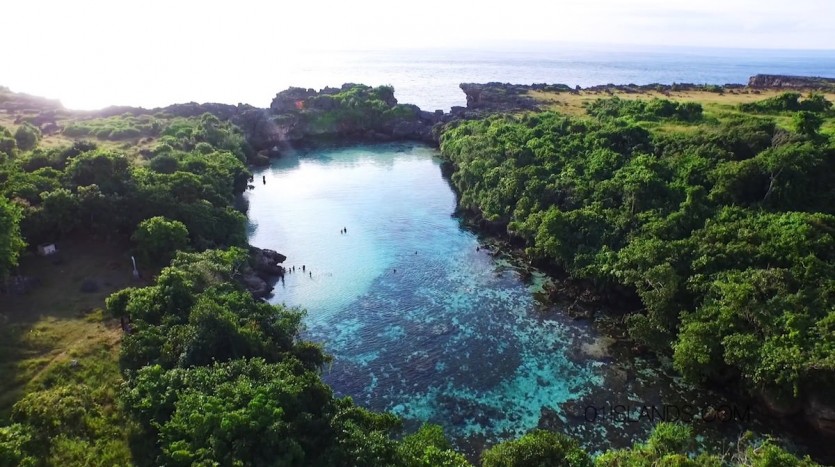 Weekuri Lake (sometimes referred to as Waikuri) is an incredible salted water lake located near Mandorak, south-west Sumba.
Water is constantly flowing in and out of the lake with waves coming from the ocean through holes underneath the rocks that separate the lake from the ocean. Because of that, there is no stagnating water in the lake.
The shallow parts of the lake are sandy but sea life is quite abundant in the deepest part (2 to 3 meters) where some corals, crutaceans and fish can be found. The ecosystem is however very fragile and tourists are asked to be extremely cautious not to litter or walk on corals.
The property for sale starts starts from the north shore of the lake and goes to another lake with fresh water some 250 meters northward where monkeys can be found in the surrounding trees.

The rest of the land is flat with some rocks, grass and cactuses.

The oceanfront side of the land boasts an amazing sunset that you can see from the 10-15meters cliff.
Every morning swarms of dolphins can be seen jumping around in the ocean. Turtles hatch lay their eggs on Mandorak beach nearby.
There is a direct access government road that come directly to the land. Airport is a mere 45 minutes drive and probably less when the roads upgrade program will be completed (by the end of 2015 according to the Bupati)

Sumba on wikipedia:
Sumba (Indonesian: Pulau Sumba) is an island in eastern Indonesia, is one of the Lesser Sunda Islands, and is in the province of East Nusa Tenggara. Sumba has an area of 11,153 km2, and the population was 656,259 at the 2010 Census. To the northwest of Sumba is Sumbawa, to the northeast, across the Sumba Strait (Selat Sumba), is Flores, to the east, across the Savu Sea, is Timor, and to the south, across part of the Indian Ocean, is Australia.

Historically, this island exported sandalwood and was known as Sandalwood Island.

Before colonization by western Europeans in the 1500s, Sumba was inhabited by Australian and Polynesian people.[citation needed] In 1522 the first ships from Europe arrived, and by 1866 Sumba belonged to the Dutch East Indies, although the island did not come under real Dutch administration until the twentieth century. Jesuits opened a mission in Laura, West Sumba in 1866.

Despite contact with western cultures, Sumba is one of the few places in the world in which megalithic burials, are used as a ‘living tradition’ to inter prominent individuals when they die. Burial in megaliths is a practice that was used in many parts of the world during the Neolithic and Bronze Ages, but has survived to this day in Sumba, and has raised significant interest from scholars. At Anakalang, for instance, quadrangular adzes have been unearthed. Another long-lasting tradition is the sometimes lethal game of pasola, in which teams of often several hundred horse-riders fight with spears.

The largest town on the island is the main port of Waingapu, with a population of about 52,755. The landscape is low, limestone hills, rather than the steep volcanoes of many Indonesian islands. There is a dry season from May to November and a rainy season from December to April. The western side of the island is more fertile and more heavily populated than the east.

Due to its distinctive flora and fauna Sumba has been categorised by the World Wildlife Fund as the Sumba deciduous forests ecoregion. Although generally thought to be originally part of the Gondwana southern hemisphere supercontinent, recent research suggests that it might have detached from the South East Asia margin. Sumba is within the Wallacea ecozone, having a mixture of plants and animals of Asian and Australasian origin. Most of the island was originally covered in deciduous monsoon forest while the south-facing slopes, which remain moist during the dry season, were evergreen rainforest.